Dr. Taylor Hartman, author of The Color Code, and a very successful clinical therapist with two PhD’s after his name, will tell you that his greatest achievement in life is not those PhD’s. His greatest achievement is helping “the one” – the individual learning to see themselves clearly for the first time, and suddenly lit up with the possibilities before them.

Internationally recognized for his pithy candor and spirited presentations, Dr. Hartman gets to the heart of what matters quickly. During his eight years as a professor at the University of California at Long Beach, he was awarded the outstanding lecturer of the year. He has appeared on numerous television programs including the TODAY Show, The Gayle King Show and The View with Barbara Walters. He has also been a guest on hundreds of syndicated radio shows and local TV spotlights and has penned many magazine articles.

In addition to his seminar work, Dr. Hartman currently maintains a private practice for individuals seeking to improve the quality of their relationships and their personal mental health.

Raised by a “Red” mother, Taylor Hartman believed he needed to be Red in order to succeed. Once his wife pointed out he was actually Yellow, not Red, his life became a lot better — and a lot more fun! 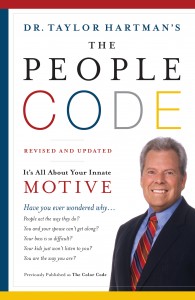 “I had all the content for The Color Code in my head,” Taylor Hartman recalls. “But I didn’t want to write it. My wife said if I didn’t write the book, we wouldn’t go out and enjoy any more dates.”

That ultimatum was enough for Taylor to rearrange his schedule and focus on writing the book until it was finished. It would go on to make him a champion to thousands of people worldwide looking to understand why they are the way they are.